Make vs. Buy: An Infographic from Dorner Conveyors

This is a pretty cool article and Infographic from Dorner. I used to use them a lot in the old Automation Consulting Services, Inc. and working with NAS.

As they mention in the infographic and in their blog, a lot of factors went into the decision on whether to make or buy a conveyor. NAS built most of their own conveyors, mostly because they had the expertise and equipment to do it well. Dorner makes a lot of tabletop chain conveyors, and NAS usually bought their finished systems from them if they needed a stand-alone system, but if something needed to be built into a machine they usually just bought components and built conveyors as a “kit”.

A mill and lathe are pretty much minimum requirements if you want to get into building your own conveyors. Most of the track and chain can be bought and assembled, but being able to key shafts and turn them down are necessities.

Some of the factors in the infographic matter less if you are a custom machine builder. Time is less of a factor because the product is the conveyor, and the assemblers are used to building conveyors. Space is also not an issue because they reserve the space for the ordered machine anyway.

On the other hand when I worked for Wright Industries they never built their own conveyors. For one thing it really wasn’t a part of their core business, and for another their internal design and manufacturing costs were much higher than NAS’s. 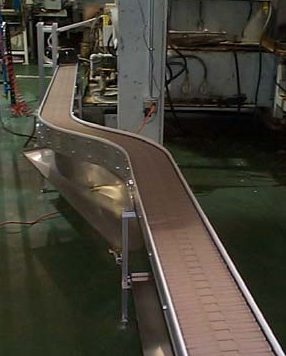 Here is a picture of the only tabletop chain conveyor I ever built. My company was small enough that this kind of project could stand by itself, we simply ordered all of the parts and subbed out the machining that we couldn’t do. Since we were mostly a controls company, the only way this was justified is that we got to integrate the conveyor into their manufacturing system. 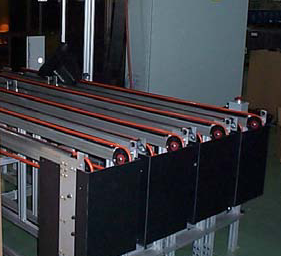 Here is a conveyor that is not something you will find in catalogs, it is pretty much always going to be more economical to build it yourself. There isn’t much cost in the components, so the markup for engineering and labor would be too high to justify.

Whatever your decision on making vs. buying conveyors, it is definitely something you should become more educated on. there are lots of good resources out there, many of them included in manufacturer’s catalogs and certainly on websites like Dorner’s. If you need further help in decision making or design, there are always companies like mine out there that can help, check out my Resources page for more.