↓ Skip to Main Content
Home › Business › The Philosophy of Buy-In

The Philosophy of Buy-In 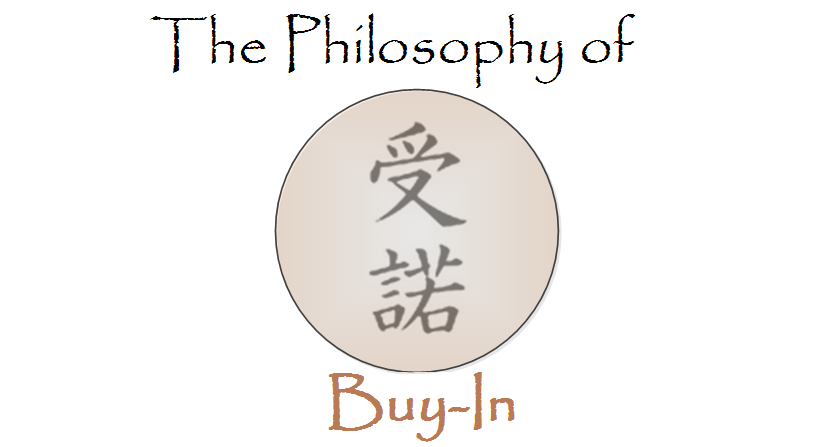 Whew, finally back from a grueling two-week trip to New Hampshire. In addition to the politics and frustrations that go with working with multiple companies and egos, I also ended up in the hospital for a day with both a kidney stone and diverticulitis… anyway, I’m really glad to be back.

I mentioned in my last post that I am working on a standards development and consulting project. Part of this type of work involves ensuring that others come to a consensus on what kind of standards, templates and solutions will be used in the future.

In a technical field such as I work in, there are already a lot of rules that have to be followed put out by various organizations. OSHA, NEC, IEC, NFPA, UL are just a few of these. The relate to safety and best practice methods for hardware and software in the technical and industrial world.

Even with all of these rules there are still a lot of important things that aren’t written anywhere, they are just things people have done a certain way for a long time. If people don’t know how things are done elsewhere, they often just make up their own way. In this case, I was brought in as someone with a lot of experience in the custom machine building arena.

When proposing new ways of doing things, it is important that people “buy-in” to the methods being proposed. This article is one I wrote for my business site back in October 2013:

It is well known in the Lean Six Sigma world that buy-in from the top is critical to a project’s success. Unless the executive leadership of the company is behind an improvement project, it has little chance of being successful.

It is important that management understands at least some of the technology behind the process also, otherwise it is difficult to say they truly support it. CEOs and other executives are often focused only on the financial results of a project rather than the steps it takes to accomplish the goal. One quote I have heard before is “I don’t want to hear about the labor pains, I want to see the baby”. Since management has to ultimately sign off on a project’s budget however, it is important that they understand some of the technical risks associated with the project.

Buy-in from project stakeholders is also considered to be an important part of ensuring that an enterprise is successful. Stakeholders may come from various levels of a company’s management structure, ranging from the engineering department to upper management.

What is often overlooked is that without buy-in from every level of an affected division, projects don’t go as well as they could. If employees are affected by a program, but don’t understand why it is being implemented, they are often dismissive of the idea.

As I work on my Six Sigma classes through Purdue I am reminded often of my previous experiences with companies who have Lean/Six Sigma programs. Back in the late nineties we did a lot of work for Avery Dennison, who manufactures a variety of office supplies; binders, pens, markers etc. Many of the processing and packaging machines we built were in response to Six Sigma initiatives trying to squeeze the last bit of waste out of each process. Margins are low and competition tough in this industry and there were a lot of Green and Black belt candidates working on these and other projects.

I really didn’t know much then about Lean and Six Sigma, but QS9000 and other programs were big at that time. I had unknowingly learned a lot of the terms and techniques associated with quality through my relationships with Japanese companies; Kaizen, Pokayoke, Kanban were all familiar terms. Many of the other buzzwords and acronyms such as CTQs, DPMO, JIT were Greek to me though and I remember thinking that the guys at Avery that were involved in the Six Sigma program seemed like they were part of an exclusive club whose techniques were secret and motives obscure.

Now as I go through my coursework I understand why that perception exists. Six Sigma buy-in is targeted toward the top of the organization; after all that’s where the people who have the ability to enforce change are. It also turns out that the selection of Green and Black belt candidates is often based on who shows the most initiative and potential for advancement, i.e. the “Best and Brightest”. This invariably makes people feel special when they are chosen to participate in the program. The problem I saw with this is that it increases the stratification of the company. The engineering staff that worked on the plant floor in maintenance or production were rarely involved in the programs. Occasionally one would be selected for the Green belt program but this was often either seen as a ticket to an office and management job or an extra burden on an already overworked fire-fighter.

One of the questions posed in our classroom discussion was “What do you think is the key to success of Lean Six Sigma today?” In my opinion the key to success of this or many other programs is to involve everyone in the process and educate them in the techniques and terminology. It shouldn’t be seen as an extra burden or an exclusive club but as an opportunity for everyone to contribute to the improvement of the process. Part of my perception that the program was kind of a clique in the particular plant I was in was the political climate of the workforce. There was truly a separation between management and labor, white collar and blue collar. This seems to be part of human nature and it is strongly reinforced by unionized plants. As an outside observer I didn’t have many preconceived notions about the program but I find it interesting viewing the content of the classes after this experience years ago. This selective buy-in and inward focus is actually one of the obstacles that the program warns of.

Creating a culture where everyone involved in a program feels included is important to any company. When machine operators or maintenance workers who have not been trained in Lean Manufacturing or Six-Sigma see a lot of activity that involves “their” work area or machine, they naturally want to be involved. In many cases, they can be valuable resources for a project since they often know more about the operation of their machinery than anyone else.

Buy-in is important not only for Six-Sigma and Lean Manufacturing-related projects, but for any project that affects personnel. This includes implementation of new production lines, machines and processes.

Some of the main points of this philosophy:

• Management should have a working knowledge of the issues associated with technical risk for a project.
• Buy-in is important from every level of an organization involved in a project, not just a selective group.
• Workers develop a sense of pride and ownership in their area of responsibility and want to feel included. When they don’t, it has a negative impact on the project.
• Factory floor workers have expertise in their area of work, making them invaluable resources for Lean Six Sigma managers or consultants.

On this project there are a lot of people and companies involved with what I am doing. Of course there is the management of the company I am working for. There is this company’s biggest customer, who would be affected by any changes I propose. There are at least 4 different sub-contractors that would have to use the techniques I develop. There are the engineers and technicians that are employees of the company, almost all of them new. There is also a large integration and consulting company that the customer has brought in that of course wants everyone to adopt their standards and methods instead.

I think I have buy-in from the company management. I have at least partial buy-n from the employees themselves. Even some of the contractors have been supportive.

Unfortunately there are some big egos involved. Sometimes people in high positions feel threatened or that they have to show their knowledge or power. This seems to be a political thing with some people, and I am really not a very political person. I would really rather leave that aspect of my field up to people who are good at it.

What do you think?