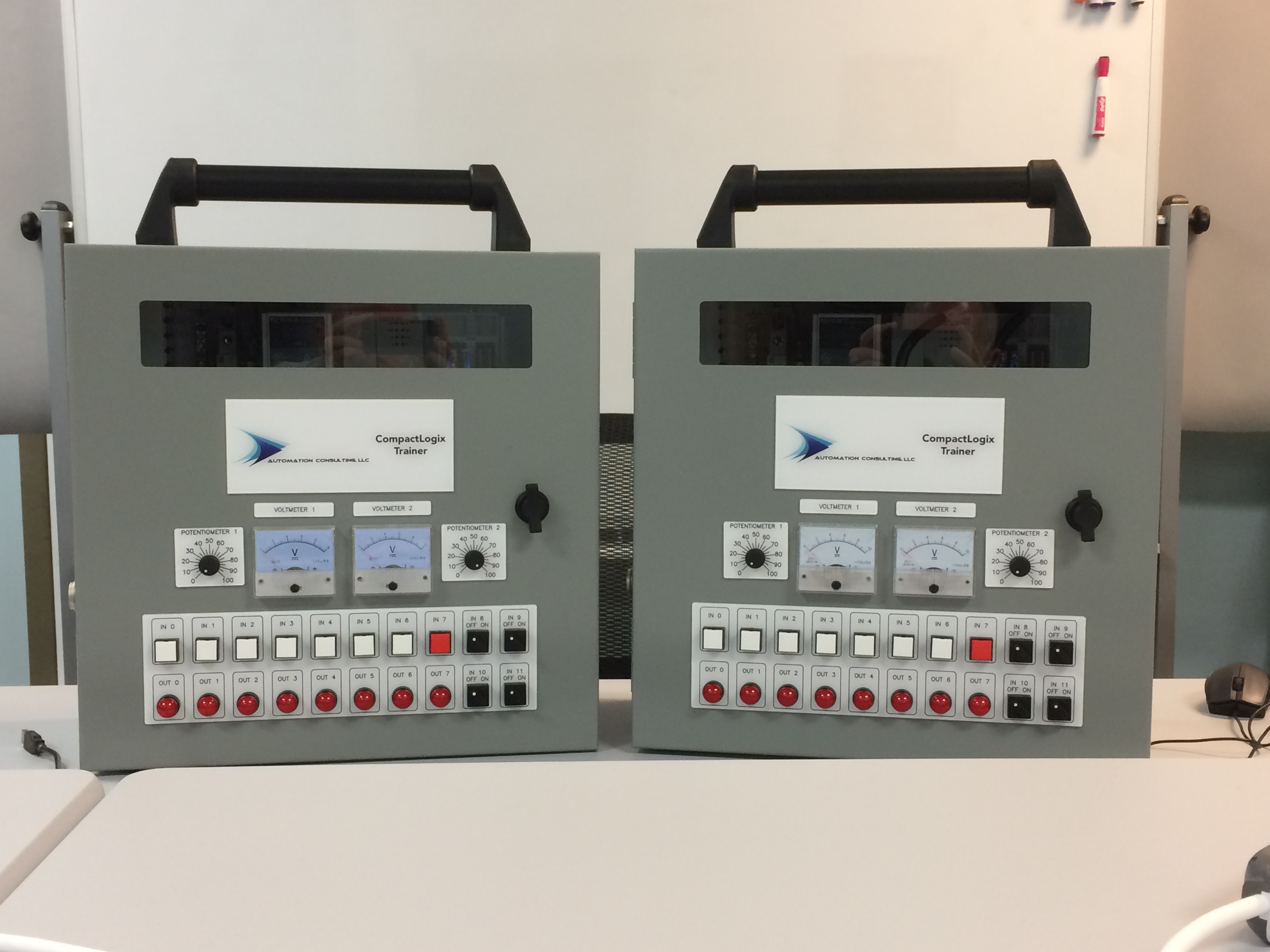 Well, its official. I have my first actual PLC trainers, in addition to the ones on the wall in My Little Factory. I think they’re awesome! They did take 8 weeks to build, but as more are made I think some the logistics things will get worked out. In addition to fabrication time, there is also the time it takes to check out the I/O and get the firmware set up.

Now they aren’t cheap, and I won’t be shipping them to any customer sites, but they do have some excellent features that you won’t find in a typical suitcase-style trainer. 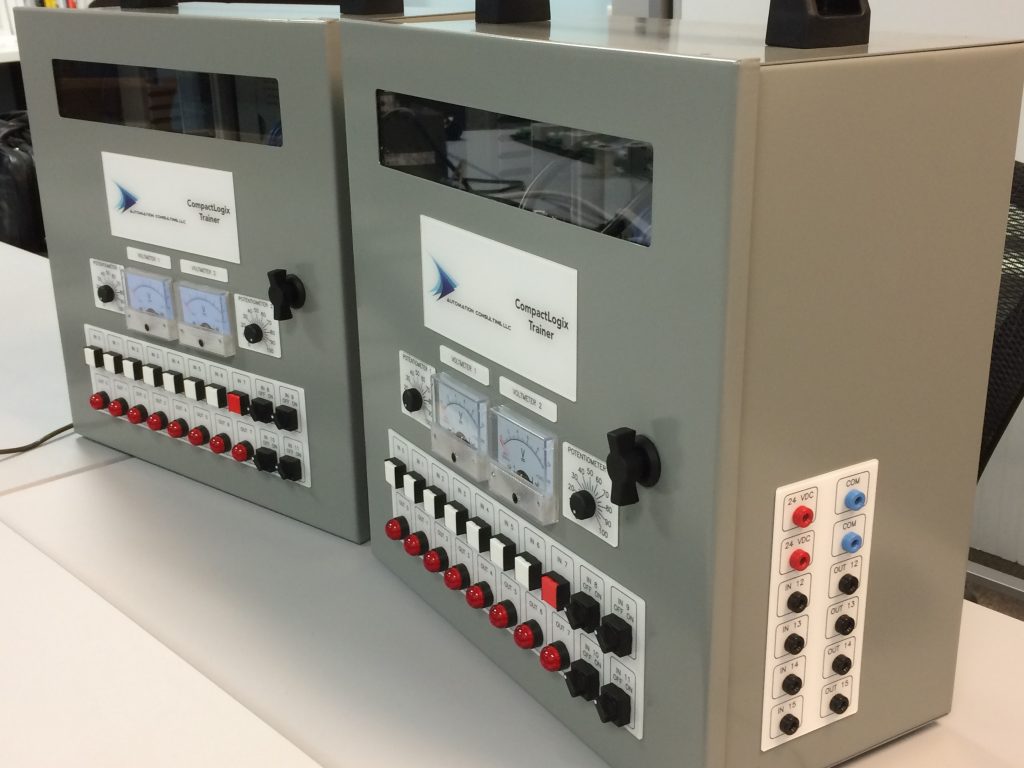 First, notice that there are input, output and power banana-plug jacks on the sides. This allows hardware to be connected for training as I described in last week’s post.

On the other side there are two Ethernet ports, one for programming and one for remote I/O. There is an M12 connector to provide power to dedicated devices, as well as the power switch and power socket. One of the pushbuttons is also wired normally closed, which is helpful when explaining certain programming concepts.

Automation NTH built them and has made two more of their own that we can use with the four laptops I have loaded with software. These will be very handy with the advanced custom classes I am teaching. They and several other trainers will soon be appearing for sale on my business website.

I am also working on some much less expensive trainers for the MicroLogix 1100, shown below.

These will be in a plastic box and have more limited I/O, though it will have two analog inputs. The reason I chose this platform is that the software is free, yet in most ways it matches the SLC500 platform well enough for training. This will be my attempt at the least expensive A-B demo I can come up with.

For those who have been wondering about the status of My Little Factory, it’s still coming along, though slowly. 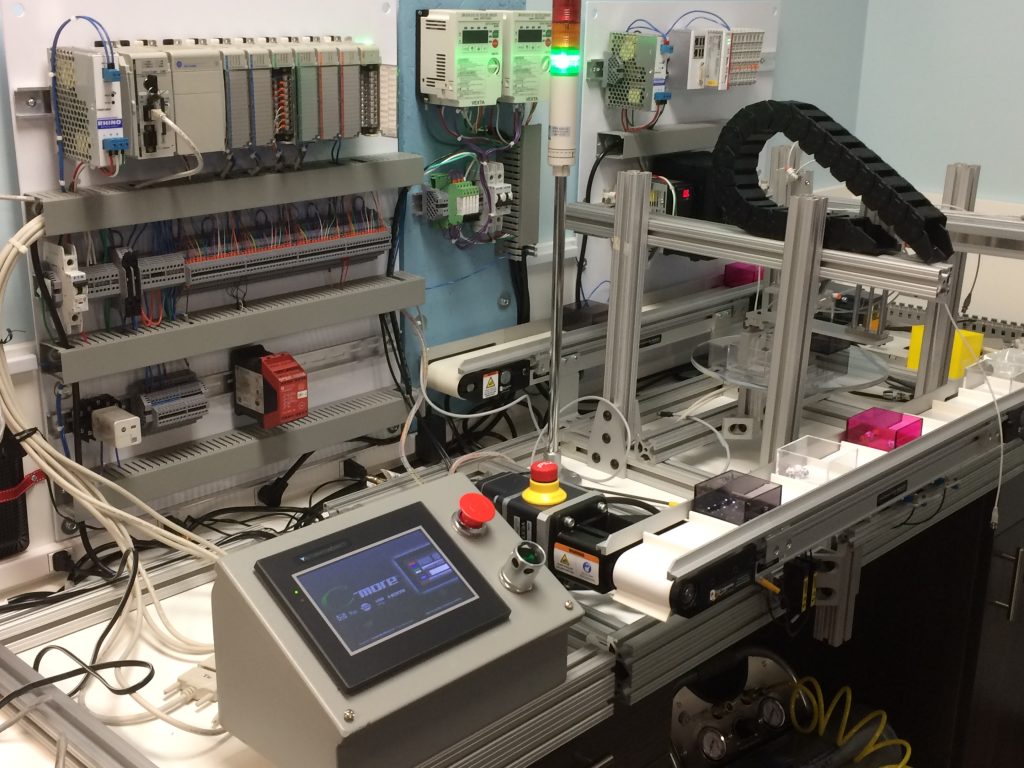 The pick and places are mounted, but there are several small widgets that need to be installed before I can run them, not to mention that they aren’t plumbed and the valve banks aren’t mounted yet. Its hard to break off enough time to get everything done. The ball escapements are also still languishing.

In my defense, I have been making a lot of PLC training videos for a customer and am getting better at it. This means that the online PLC classes are much closer along with my next PLC book, which includes lots of advanced stuff.

Anyway, I’m excited to get to use these new demos. Come take a class and check them out!

2 Comments on “My New Trainers!”