After spending the last couple of weeks teaching PLC programming, I decided to do a little research on the popularity of the different manufacturer’s platforms worldwide. I have been asked many times in the past who the biggest, most popular, “best” PLC manufacturer is and I try not to inject my own preferences into the discussion. I have worked with 9 or ten different PLC platforms in the past and have recommended different platforms based on customer needs and budgets. I consider myself proficient in most of the major manufacturer’s platforms, with the exception of Modicon (in which I have little experience).

You would think that in the modern days of Google and other search engines that information like this would be fairly easy to come by. After all, with user groups in Linked In, online forums like control.com and surveys posted regularly by the manufacturers themselves such information should be readily available.

It is fairly easy to get information on the relative size of automation companies. Jim Pinto wrote a post in 2012 on the top 50 automation companies which used data from controlglobal.com’s 2011 list. This placed Siemens at the top spot worldwide with other major PLC manufacturer’s as follows:

This list is missing some notable PLC manufacturers such as Keyence, Idec, Panasonic and Koyo. So how to drill down and analyze the PLC market by itself?

ARC Advisory Group is the leading global market research firm for automation, asset management, control, M2M, MES, PLM, SCM and software. Their most recent analysis of the market is available here. I have submitted a request for information as their pricing is not available online… I have a feeling it will be expensive. It is also unlikely that I can share it in any meaningful way without infringing on copyright laws.

A November 2001 survey by this group is available here. The results are out of date and 58% of the respondents were from North America, but it does provide an idea of what the market might look like today:

In North America Rockwell/Allen-Bradley had between 60% and 70% of the market share in both OEM and end-user markets. Siemens was a very distant second with 5% of the OEM market and 19% of end users, Schneider (Modicon) took the third spot with 5% of OEMs and 4% of end users. This left about 20% of the market in both the OEM and end-user categories for all other manufacturers combined.

In Europe Siemens had a much greater percentage of the market, especially among end-users. Much of the Allen Bradley presence among OEMs probably had to do with equipment imported from or designed by companies in the United States. 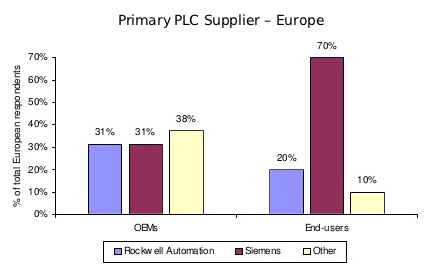 Modicon is not broken out in the European market but probably makes up a significant portion of the “other” category in the end-user market since they are a French company. Japanese PLC platforms such as Mitsubishi and Omron probably make up a major part of the other among OEMs.

In this survey a conclusion is drawn that Mitsubishi dominates the Japanese market. There is no data for this listed in the report but this is probably a valid assumption. Japanese engineers I have worked with in the past certainly seem to prefer it.

In my experience people often resent the biggest of these PLC manufacturers because of the cost of their products (especially software) relative to other platforms. The software licensing policies also make it difficult for engineers and technicians to obtain their own software for training and practice. Over the last couple of weeks I have had some good discussions with guys who work in the manufacturing environment every day. It was easy to pick up on some of the frustrations they have had with the ability to get support from manufacturers. In general people were pretty happy with the local vendors but less so with the manufacturers themselves. At the same time, when a company has mostly one brand of PLC in their plant there is little ability to do much about it.

Overall I remain somewhat brand-agnostic. What is best for most industrial manufacturers is usually whatever PLC they already use. I certainly have my preferences, but much of this is probably based mostly on familiarity and experience with the software and hardware.

If you have any thoughts on the subject post them below. What brand of PLC do you prefer? Is it the one that you are the most experienced with or is used the most where you work? What software do you like the most or least? Hardware? How much of a part does price play in your selection process?