Frank Posted on November 11, 2012 Posted in The Book, Travel, Vendors and Manufacturers Tagged with vendors 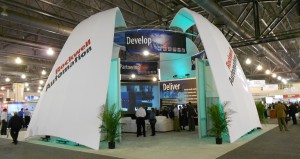 As part of my picture-collecting for the book I decided to attend the Allen-Bradley Automation Fair again this year. I have attended the last few years in Orlando, Chicago and Nashville; this year it was in Philadelphia.

There are always interesting products to see, though of course it is very A-B-centric. I used to enjoy attending the ISOA industrial shows because they had lots of competing products. The Automation Fair does have booths from competing integrators, pneumatic companies and schools but of course all of the sensors, components and controllers are A-B. Cognex, PPT and Dalsa were there for vision systems, Numatics and SMC for pneumatic components. There was a big Hoffman/Pentair booth, Denso, Yaskawa/Motoman and Adept were there representing robots.

The trip accomplished its purpose as far as collecting pictures. The book has somewhere around 150 figures in it, many are drawings or illustrations but there are a lot of individual components such as fuses, motor starters, gearing and the like. McGraw-Hill has a very particular permissions form that has to be filled out for pictures taken by other people, so it is in my best interest to take the pictures myself wherever possible. I have combined this trip with a visit to New York City to meet with the publisher. Since I visited the fair on Wednesday and Thursday and my meeting is on Monday I am doing some sightseeing in Baltimore and Atlantic City over the weekend. The weather has cooperated so far except for when I arrived in Philly during a Nor’easter.

Unless I have some particular reason to attend this will probably be my last visit to the Automation Fair for a while. I generally meet a few people I know there and learn something new, but pretty much everything I need to know about products is available online. Next year’s Automation Fair is in Houston, somehow I don’t think the cheesesteaks will be as good…