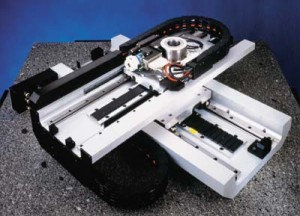 Following is a subchapter on motion control from my forthcoming book. My philosophy on writing these articles is to cover the topic very generally since the book is intended to cover the entire field of industrial automation including business systems, components, concepts and practical applications in only a few hundred pages. This subchapter is under Actuators and Movement (Section 3.5) which is in turn under Section 3, Components and Hardware. Some of this material is covered under PID Control, Servo Motors, Servomechanisms, Actuators and Robotics which are all in different subchapters. Sometimes it is difficult to decide how to organize the sections.

Here is where I used to say “From The Primer” but I guess now I’ll just have to say “from the Book:”

Motion control is often considered an entire subchapter within the field of automation. Motion control differs from standard discrete controls such as pneumatic cylinders, conveyors and the like by the fact that the positions and velocities are both controlled by analog or digitally converted analog methods. This is accomplished by the use of hydraulic or pneumatic proportional valves, linear actuators or electric motors, usually servos. Stepper motors are also a common component is small motion control systems, especially when feedback may not be economical. Motion control is used extensively in packaging, printing, textile, semiconductor and assembly industries. It also forms the basis of robotics and CNC machine tools.

The basic architecture of a motion control system consists of:
• A motion controller to generate the desired output or motion profile. Movement is based on programmed set points and closing a position or velocity feedback loop.
• A drive or amplifier to transform the control signal from the motion controller into a higher power electrical control current or voltage. This is what is applied to the actuator and actually makes it move.
• An actuator such as a hydraulic or air cylinder, linear actuator, or electric motor for output motion.
• One or more feedback sensors such as optical encoders, resolvers or Hall effect devices. These return the position or velocity of the actuator to the motion controller in order to close the position or velocity control loops. Newer “intelligent” drives can close the position and velocity loops internally, resulting in more accurate control.
• Mechanical components to transform the motion of the actuator into the desired motion. Examples are gears, shafting, ball screws, belts, linkages, and linear and rotational bearings.

A stand-alone motion control axis is common when positioning, however there are times when motions must be coordinated closely, this requires tight synchronization between axes. Robotics is an example of a coordinated motion system working together. Prior to the development of fast open communication interfaces in the early 1990s the only open method of coordinated motion was analog control being brought back to the controller in the form of encoder, resolver and other analog methods such as 4-20mA and 0-10v signals. The first open digital automation bus to satisfy the requirements of coordinated motion control was Sercos (www.sercos.com). This is an international standard that closes the servo feedback loop in the drive rather than in the motion controller. This reduces the computational load on the controller allowing more axes to be controlled at once. Since the development of Sercos other interfaces have been developed for this purpose including ProfiNet IRT, Ethernet Powerlink, Ethernet/IP and EtherCAT.

Besides the common control functions of velocity and position control there are several other functions that may be considered. Since torque feedback can be determined from the current and velocity of the servo, pressure or force control is another function of a servo actuator. Electronic gearing can be used to link two or more axes together in a master/slave relationship. Cam profiling where one axis follows the motion of a master axis is an example of this. More detailed profiles such as trapezoidal moves or S-curves can also be computed by a motion controller enhancing standard positional moves. This helps to eliminate acceleration or deceleration impacts such as “jerk”.

One of the best online resources for motion control theory and components is Motion Control Resource (www.motioncontrolresource.com). This site is amazingly free of advertisements and contains links to many major motion control component manufacturers and distributors.