Here is another recently rewritten article, if anyone has any suggestions please let me know.

An Encoder is a type of transducer that senses position or orientation, usually for use as a reference or active feedback to control position. Encoders may be rotary or linear, optical or magnetic, analog or digital depending on the type of application.

Rotary optical encoders use a rotating glass or metal disk with slots or perforations along the circumference. An LED emits light along the path of the slots creating a train of pulses which can be used to count or measure distance. By placing two sets of slots 90 degrees out of phase with each other the direction of rotation can also be determined. These two signals are known as the A and B pulses of the encoder. The inverse of the encoder A and B pulses are also often used, commonly known as A not and B not. A single slot is also placed along the circumference known as the Z pulse; this is used for identifying the home or reference position of the encoder or device attached to it. This offset A and B pulse configuration is known as quadrature.

Encoders are often of the multi-turn variety, that is they will turn multiple times providing a count much higher than the number of slots on the disk. This means that the High Speed Counter or servo module that the encoder is connected to must keep track of the number of turns or total count of the pulses. If the power is removed from the counter or control system it is necessary to “home” the axis or device attached to the encoder, typically to an external “home” sensor and the Z pulse.

Resolvers are also used to detect rotary position and velocity. A resolver is best described as a rotating electrical transformer that provides a sinusoidal output which is then converted to a digital value representing position. A common type is the brushless transmitter resolver. This type of resolver is similar to an electric motor in that it has a rotor and stator. The stator portion is made up of an exciter winding and two two-phase windings, labeled X and Y. These windings are located at 90 degree angles to each other. When an alternating current is induced into the exciter winding the signal is transferred into the rotor windings and then back into the X and Y windings. This provides a sine and cosine feedback current which is measured to determine the angle of the rotor. Upon one full revolution, the two feedback signals repeat their waveforms. Because resolvers are analog, they effectively have infinite resolution. 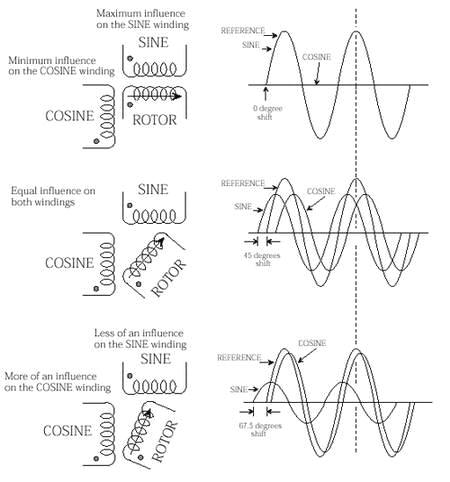 3 Comments on “Encoders and Resolvers”