Frank Posted on March 27, 2011 Posted in Panelbuilding Tagged with panelbuilding, tools
This picture is from about 1999 when my small company was primarily a panel shop and controls integrator. At this time about half of our work came from NAS who built a lot of custom packaging equipment (they build mostly standard equipment now). Over time we developed a standard for building panels, mostly by trial and error and adopting a lot of other company’s standards. We would do jobs for larger companies like Denso or Alcoa and they would give us a standard to build by, I figured if this was the way big companies built panels it was good enough for us.

As we started building more and more panels for local companies we started accumulating a lot of nice tools. Things like a hydraulic punch and shear, band saws and belt sanders and nice label printers and software improved the throughput and efficiency of the shop. A training program was also developed to allow new employees to learn how to properly lay out a panel and use the drills, taps and riveters that were part of the job. Many of our part time employees were ITT Tech students who were hoping to get some hands-on experience before entering the work force full time. Several ended up permanent employees of ACS when they graduated.


Not all of our panels were for industrial facilities, some were for lab environments or medical facilities. These followed and entirely different type of specification; rather than using standard NEMA 12 or 4 industrial enclosures they often used custom sheet metal folded boxes without removable backplanes. This could be somewhat challenging as they usually involved multiple duplicate boxes that needed to look exactly the same. Handy mounting and wiring aids such as din rail and terminal blocks were not used. There were usually a lot of lower voltages and ribbon cables involved. 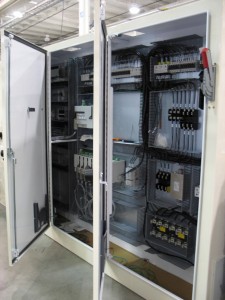 Larger panels had challenges of their own; larger gauge wire, power distribution issues and the fact that we didn’t have a fork lift all contributed to multi-door enclosures taking more effort to build. Fortunately most of these panels were later in my company’s life when we were also doing the programming, design and installation of systems. This created opportunities to leverage the cost of doing the entire job.

Over the years we created a standard tool box that employees would use when building control panels. Several types of wire strippers, diagonal cutters, screwdrivers and wrenches were put in the box and the handles color coded so people could get their tools back together when the day was done. Experienced panelbuilders usually had their own toolboxes, but for our part time and inexperienced people this could be very convenient. Most of the cutting tools, punches and labelers were provided by the company.

For a while I had considered starting a franchise type business where tools, training and sales leads would be furnished to franchisees under an advertised name “LectroFab” which was the name of our original small panel shop. I still think the concept is a good one, especially when job security isn’t what it used to be and there are a lot of skilled industrial and maintenance people looking for work. As with several other ideas this has remained only a thought, but if anyone has any interest in such a concept please let me know if I might be of help.