Poka-yoke is a Japanese term roughly translated to “mistake-proofing”. Techniques include the use of sensors to verify part location, orientation and quality, fixturing to ensure incorrect components can’t be installed, sequencing and detection of proper assembly steps by such techniques as pick-to-light, and a host of other techniques. There are several good books covering the subject as well as a number of websites. One I have used as a reference for several years is John Grout’s Poka-Yoke page or his new (commercial) page. This resource gives examples of techniques that aren’t even in the industrial or assembly field such as pens that automatically retract when clipped into a pocket. The hole that allows water to drain from a bathtub when the level gets too high may be viewed as a form of Pokayoke. 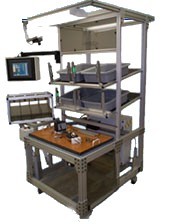 This is an example of a small Pokayoke system I built for commercial use back in 2003-2004. Note the pallet fixturing which only allows parts to be placed into the holders in a particular orientation. The shelves and bins at the top and sides of the station have sensors to detect removal of parts and the fixturing has additional sensors to detect proper placement. A camera was also used in this station to do a final check of the assembled product before it is released from the holder. This also provides a record of the completed part. The unique feature of this station is that it is programmed for different parts entirely from the touchscreen. Most of these types of stations are built for a specific product.

Gauging and measurement of components is also often done as part of the Pokayoke process using many of the sensors and devices described in the Primer. Automation of processes often takes the potential of human error out of the assembly but many processes can only be performed by human hands. Some Pokayoke techniques such as orientation fixturing don’t even require control or automation techniques at all.