Frank Posted on April 21, 2013 Posted in The Book Tagged with Industrial Automation Hands On, publishing 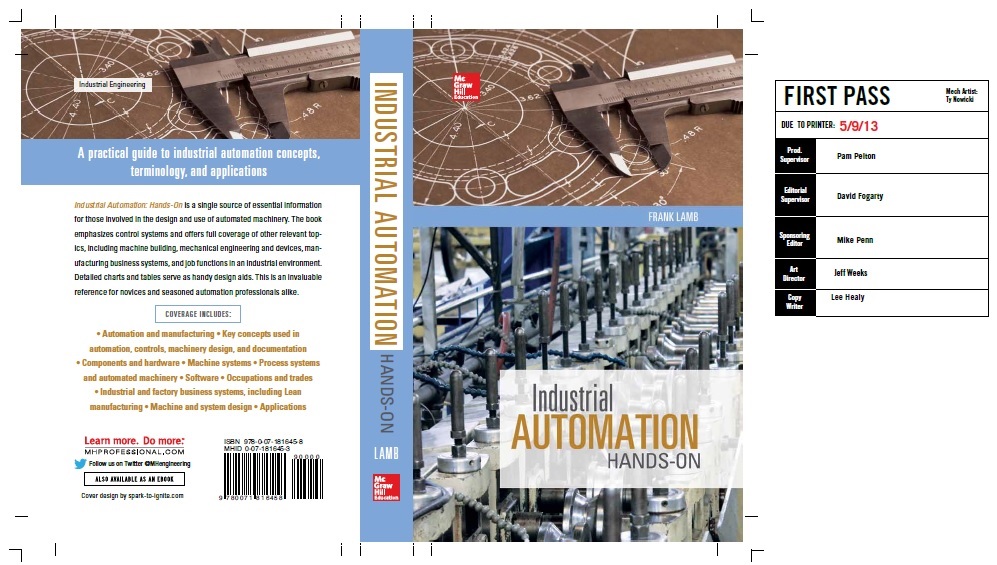 Well, I guess its official… this is the cover of my new book. Several weeks ago I asked if anybody had any preferences for the cover; there weren’t any responses to that particular post, so McGraw-Hill ended up just picking one. I kind of liked the other choice better, but this one is cool too. Both are machines I either worked on or built in the 1990s. The extrusion machine picture (not chosen) was a machine I built for Alcoa-Howmet. It looked a little more high-tech which is why I liked it I guess. The other one is a rollformer that I worked on several times for Mills Products, modifying the controls on one and integrating a brand new one in Mexico. Both projects bring back some good memories and I’m glad the book cover is something I actually worked on.

I was going to cover sequences as part of my series on PLC ladder logic but I guess I’ll save that for another time. One item of note on the picture: notice the “due to printer” date of 5/9/13. Everything has been put into its final form and I have checked the proofs for the layout. I made quite a few suggestions, mostly relating to picture sizing. They chose not to implement all of them, but said they will consider a few. Now I am frantically working on the index.

For those of you who answered my “Free Book” post, this should give you an idea of when the book might be sent. Hopefully they will send out copies as soon as its printed; I am eager to hold it in my hands. I appreciate those of you who have offered to review it for me on Amazon, I hope you find it worth your time!