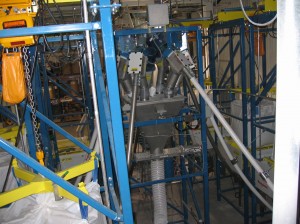 Batching refers to a number of different techniques related to the automation world including the creation of an object stage by stage over a series of workstations or the execution of a series of jobs or programs on a computer without manual intervention. This post however discusses the combining of ingredients in a recipe to form a desired mix.

Batching systems combine solids or liquids or a combination of both into a desired mixture. There are a number of ways to dispense the correct quantity of ingredients including measurement of flow, loss-in- weight from a tank or hopper or gain-in-weight in the receiving container. Typically liquid dispensing is easier to control and can be more accurate as the flow is more uniform. Powders and granular substances tend to clump or flow more unevenly so vibrators, beaters or various particle size reduction devices are often used.

The above screen shows a configuration screen from a batching system I designed in 2005. This screen allowed the user to set a feed speed and a “dribble” speed for different materials based on their characteristics. Some materials such as silica flowed very evenly while other materials such as sulfur would tend to clump more. The system above was a gain-in-weight system. A container was placed on a scale and tared or zeroed out. Material was then fed by screw from hoppers under a silo up into a funnel as shown in the top photo. Since the control of the materials was not always precise (+/- 0.5%) batches consisted of a number of full cycles of all ingredients.

To weigh the materials accurately three load cells were placed under the container platform in a triangular pattern. These were brought through a bridge circuit into a summing board and then converted into a 4-20 mA signal. Scales such as this are readily available from various vendors but are much less expensive to build yourself. They are also easily configured for the exact weight limit needed by selecting the appropriate load cells.

Lot numbers of material were also tracked through the system. Operators typed the lot number of each material into the HMI at each material changeover but this could have easily been done with barcoding or from a central material management computer.

This system used an Allen-Bradley PLC and a Maple Systems touchscreen for the controls. I am a big fan of the Maple HMIs, they are inexpensive but have nice internal features such as pop-up keyboards and recipe memory.

This screen provided an overall view of the system status and whether a particular hopper was feeding. You could press any of the hopper symbols and a smaller screen would pop up showing a particular feed status.

This system took about six months to design and program and was installed over a period of 3 weeks during Christmas shutdown. Most of the feed equipment was commercially standard equipment including bag silos, screw feeders and air handling.