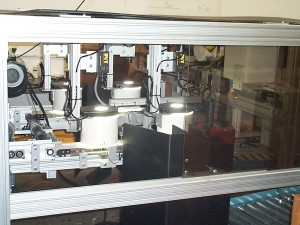 When I used to do a lot of work for NAS in Knoxville we got a job to inspect rubber gaskets after they came out of the molding process. The gaskets were about 2-3 inches in diameter and were somewhat concave with six small rubber protrusions on the top. It was easy to concept feeding them out of a vibratory bowl and orient them, but we spent a lot of time with a vision system trying to see if all of the little rubber protrusions were present. This was complicated by the cornstarch that the gaskets were tumbled in to help them not stick together in the vibratory bowl.

One day after work at the local happy hour we started brainstorming and drawing on napkins as we often did and the discussion got around to ” wouldn’t it be great if they would just paint the little protrusions so we could see them!” This led to the idea of coating the top of the gaskets with a water based UV phosphor and using a black light to illuminate the parts. We came up with a stainless steel roller that would run over the full width of the conveyor after the parts were oriented. The roller transferred the water based ink quite well and the images were excellent!

Over time the system became too costly and maintenance intensive to continue but I know it was in production for three or four years. The conveyor belts eventually were coated with the UV dye and had to be replaced periodically, but the ink was undetectable on the part after it dried.

The moral of the story, sometimes the best ideas come out of happy hour!