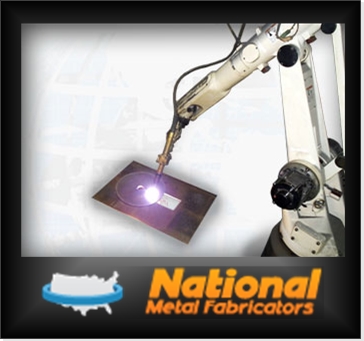 It’s difficult to inspect a welded joint. Two metal pieces may appear fused together, but without destructive testing, it’s hard to be sure. That’s why it’s essential to first optimize and then fix all the variables in the welding process. Eliminating variation ensures the last weld made is as good as the first.

Robots are a powerful tool for guaranteeing consistency and are widely used for both gas metal arc welding (GMAW), and resistance or spot welding. Each process has characteristics making it suitable for robotic automation.

In arc welding, an electric arc is struck between two electrodes, one of which is usually the workpiece and the other the torch. The heat of this arc flows into the two metal pieces being joined, and melts filler wire that bridges the gap or forms a filet between them.

In Metal Inert Gas (MIG) welding the electrode doubles as the filler wire being fed to match the torch movement speed. An inert gas flows down, around the filler to shield the molten metal from air that would otherwise cause oxidization and flaws in the joint. Tungsten Inert Gas (TIG) welding is very similar, the difference being that filler wire is added separately.

Creating a quality MIG weld depends on keeping the pool of molten metal stable. That in turn hinges on consistent arc length, orientation and speed of movement.

Submerged arc welding (SAW) is a variation on MIG where powdered flux rather than gas shields the melt pool. As the pool is hidden from view, this type of welding can only be carried automatically.

In resistance welding, two pieces of metal are clamped together and an electric current is applied. Resistance creates heat that locally melts and fuses the two pieces. (This is why it’s difficult to resistance weld aluminum: excellent electrical conductivity means it takes a great deal of current to produce enough heat.)

The critical variables in resistance welding are length of time the current flows and how long the two pieces are held together to cool once the current is shut off. Apply current for too long and the metal melts and flows away. Release the clamps before the metal has solidified and the joint pulls apart.

It’s challenging for even the most skilled human welder to produce exactly the same quality over the course of an eight-hour shift. Fatigue quickly sets in when workers wear heavy, protective gear and assume awkward positions to properly present the torch to the workpiece.

Robots are much better at this kind of work. Whether resistance or gas metal arc welding, they follow the same path every time. The first weld of the day is identical to the last.

Less variability means fewer bad welds, and that means reduced re-work and scrap. It also boosts confidence in the weld quality, which can translate to less inspection and testing. Weld appearance is more consistent over a production run and less post-weld dressing and cleanup is needed.

Faster than a human, immune to fatigue, and with the ability to run through breaks, robotic welding adds capacity and lowers costs. Filler wire utilization is usually higher and money is saved on personal protective equipment.

Early welding robots were time-consuming to program, which is why, as The Fabricator notes, they were only used on long production runs. The latest machines can be programmed quickly, making short runs more attractive. Furthermore, their flexibility means changeovers often take just minutes.

Adding vision to a robot reduces the need for accurate fixturing of the pieces to be joined. Instead, the robot locates the work pieces and adapts to suit their position. This increases short-run capability and saves on setup time.