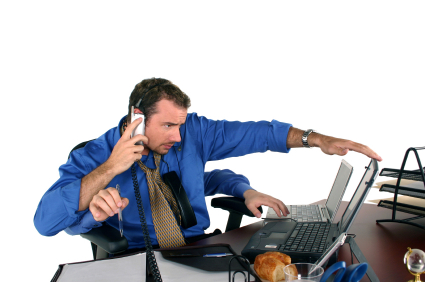 There is a great emphasis in today’s workplace on getting more done in less time. In simplified terms efficiency as it relates to individual productivity is the amount (or cost) of work performed in a given period of time.

While technology has the ability to improve our productivity by automating tasks and increasing connectivity and information exchange, it can also steal our time and create more stress. Distractions such as phone calls and e-mails reduce productivity, especially in technical fields where intense concentration is required. According to a study by the University of California, Irvine, researchers found that it took an average of 25 minutes for workers to recover from interruptions and return to their tasks.

Without self-discipline the damage can also be self-induced. Workers with access to computers are often prone to checking Facebook, surfing the web or otherwise “stealing time” from their employers. This is made even more difficult to monitor now that cell phones are essentially pocket computers. Texting and phone calls from friends and family during working hours are other examples of this problem.

The human body itself can contribute to a lack of efficiency. A biological phenomenon known as the Ultradian Rhythm affects our daily routines in a variety of ways. These are recurrent cycles of bodily functions, examples are blinking, urination and bowel activity, circulation and heart rate. This same type of cycle causes energy levels to rise and dip roughly every 90 minutes. According to consulting firm “The Energy Project” of Yonkers, NY at that point it is important to think of some sort of renewal, to put fuel back in the tank before you start the next cycle. This may take the form of a healthy snack, a short walk or even just pushing back from the desk, closing your eyes and breathing deeply.

Another aspect of efficiency in the workplace is that of multitasking. After the emergence of personal computers in the 1990s the term started to appear on resumes. Multitasking in computers is simply parallel processing, the simultaneous running of multiple tasks or programs. When applied to people, the term multitasking means that someone can work on multiple projects or tasks within a project at the same time.

Most lean management philosophies now address multitasking as a drain on resources. Studies show that it can take 25 to 40 percent longer to get a job done when you are trying to work on other projects. To be more productive, Andrew Deutscher of The Energy Project says “do one thing, uninterrupted, for a sustained period of time.”

But what if you are assigned to multiple projects? It might be nice to think that you could simply complete one project and move on to the next, but when a project has interdependencies between different people and disciplines (as in machine building), reality says you need to mesh your schedule and tasks with others involved in the project. The project schedule or Gantt chart usually provides a broad outline for when various tasks need to be completed. Within that framework it is usually up to the individual as to how they will accomplish the tasks.

The fact is some job functions lend themselves to multitasking better than others. As shown in the above diagram, it may be easier to accomplish several of the same types of tasks across several different projects than to perform a project linearly. The diagram shows a typical project progression for controls engineering, something I am very familiar with. In a larger company these tasks may be spread across several departments. At Wright industries concepting, CAD and documentation were largely performed by the applications department, technical writers and junior engineers. At smaller companies these tasks often have to be accomplished by the same person.

I have found it fairly easy to do things like make I/O lists, flowcharts and CAD drawings simultaneously. These are tasks that to me are relatively simple and very easy to correct later if there is an error. At the same time writing complex programs or certain debug tasks can take quite a bit of concentration.

I still try and work on a single task for a particular project as continuously as time allows. Keeping in mind the advice on how long it can take to “recover” from interruptions, I try and minimize those as much as possible also. If working on a complex task I usually ignore my cell phone and I am trying to limit myself to only checking e-mails twice a day.

Some advice from Di Worrall, blogger and author of “A Climate for Change” includes ten methods of multitasking “smartly”:

1.Work on your most important task first thing in the morning. Give yourself a time frame to work on this task, either to completion or a reasonable stopping point. Next, move to the second highest-priority task. If you can gain a foothold on two or three important tasks each morning, you’ll feel more available and in control of the rest of your day.

2.Use a capture tool, such as a handwritten notebook or computer program, for on-the-spot notes regarding what needs to be accomplished.

4.Plan your day in blocks, with open blocks for urgent issues that arise. Try half-hour blocks or hour blocks—whatever works best for you. If necessary, use a timer to alert you when it’s time to move on.

5.Turn off all distractions when working on a task in a time block. Shut off email, the Internet and your cell phone. Let everything go to voice mail. Focus on your designated task without worrying about all the other stuff on your plate.

6.Plan for the urgent. When something unexpected pops up, take control by putting it on your agenda. Let people know you’ll attend to them in 5 or 10 minutes, which gives you time to wrap up your current project. Deal with email and voice mail at regular, predetermined intervals.

7.When something interrupts you and it cannot be postponed, note where you are with the task at hand. Write down key words to facilitate returning to your ideas. This will save your brain some time in trying to reconstruct your previous processes.

8.Take deep breaths, stretch and allow frequent breaks to refocus on what really matters. Far too often, a task will take us down “rabbit trails” that don’t lead to real results. Stay on target and focused by stepping back, reviewing and taking short mental breaks.

9.Don’t try to finish everything at once. Working in intervals on specific parts of a task will give your subconscious mind the time it needs to reflect on and solve challenges.

10.Instead of multitasking, learn to delegate. Which parts of your workload can be handled by someone who would embrace the opportunity? Ask for help. You’ll be surprised at how often assistance is available. You don’t have to do it all.

Of course everybody will have their own methods of dealing with scheduling.  Different job functions will require different approaches and some people have much less control of their own time than others. Using an engineering notebook or daily planner can help with keeping tasks organized and on track. Proper organization of projects using Gantt charts and other management tools also helps with efficiency.

What kind of things do you do to make your day more productive?