↓ Skip to Main Content
Home › Automation Concepts › The “Other” Automation… 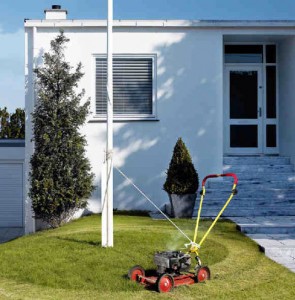 This weekend my wife and I had lunch at the Rainforest Cafe here in Nashville. If you haven’t been there, it is a theme restaurant where you are seated in a jungle setting and served by a “Safari Guide”, i.e. waitress. All around are birds and animals, moving on timed sequences with events like thunderstorms increasing the activity of the elephants, gorillas and jungle cats.

As automation goes it’s pretty simple stuff. Choreographing the movements and sounds probably took some doing, but really its just a bunch of timed sequences moving actuators, triggering sounds and flashing lights. For a strict definition of automation the outputs really should be reacting to some kinds of inputs, but for argument’s sake you could call it simple automation.

Disney’s theme parks take this to a different level. Sure, “Small World” pretty much just runs timed sequences like the restaurant, but some of the rides trigger events based on the position of the car, using limit switches to open doors or create actions. I have been told that there is a pretty good sized maintenance department at Disney World in Orlando that maintains and troubleshoots the PLC-based equipment. Safety PLCs and alarming circuits are also widespread along with a SCADA type monitoring system.

Another type of automation commonly referred to is home automation. In the early 1990s I was exposed to X-10 technology. This is a system whereby signals are superimposed over existing power wiring in a house. This allows addressable switches and outlets to be retrofitted into a home and tied into a computer system. A switch in your bedroom could thereby turn on a light in your bathroom or outside, lights can be turned on and off randomly giving the illusion that someone is home and tied into an alarm system. This was all available 20 years ago, now the entire system can be monitored from your phone including using inexpensive cameras to monitor when your cat jumps on the counter and allowing you to trigger a squirt gun remotely (yes, you Mike Finch!)

If you Google the word “automation” you are more likely to come up with hits on non-industrial applications than you are to find subjects pertaining to manufacturing. Office automation is another big area. This field doesn’t use actuators or sensors, but meets the definition of output reacting to input conditions nonetheless. Other subjects I found when searching online included Marketing Automation, Staffing Automation, Music Automation, Document Automation and many more.

Even within the field of industrial and factory automation there are so many different segments that when doing an online search it may be difficult to find information on the specific area that you may be looking for. I remember receiving a call long ago at my old business asking if my company could come repair a stove since it was an “automatic range”. Needless to say, the homeowner objected to our service call pricing structure…